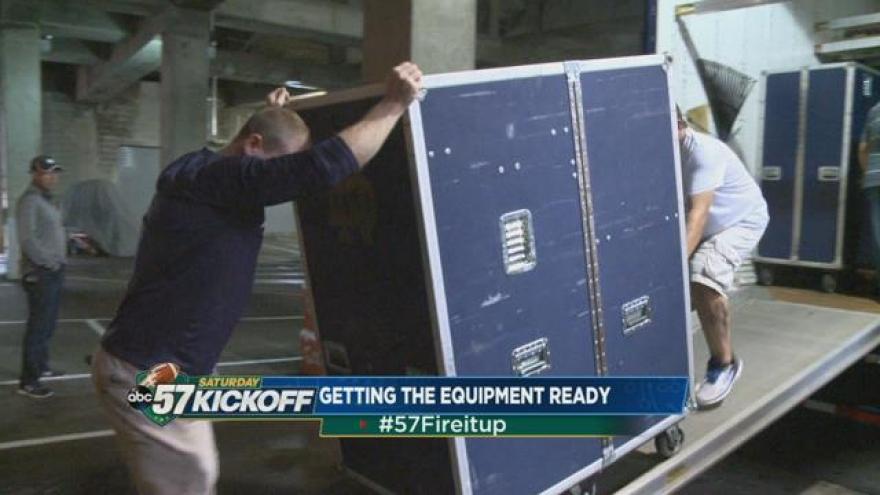 The Notre Dame equipment managers have a lot on their plate every week, but it doesn't get any easier when you have severe weather to deal with.

“My whole theory on packing is if you pack everything, you can’t forget anything,” head equipment manager Ryan Grooms said.

This weekend will test Grooms and his staff with Hurricane Matthew coming up the east coast. The hurricane isn't expected to touch down, but there will be plenty of rain.

“We got to be prepared in advance for every solution for each scenario,” Grooms said.

The forecast for Saturday is calling for 100% chance of rain during the game. Many Irish players, coaches, and fans will have flashbacks to the Clemson game last year, and so does Grooms who says that's where his staff gets put to the test.

“After it gets to that certain point other than switching out guys..... we switched them out footwear at halftime so they had dry socks and cleats. The QB towels which is obviously pretty important for DeShone, the receivers, the lineman especially the center you know to do everything we can to keep their hands dry to help prevent anything,” Grooms said.

Now footing is going to be a big problem during this game with the wet conditions. This requires Grooms and his staff to bring a significant increase in the amount of shoes they normally bring.

Grooms says his team normally is able to take it easy during games, but today, they'll need to be on full alert.

Today 82° Times of sun and clouds