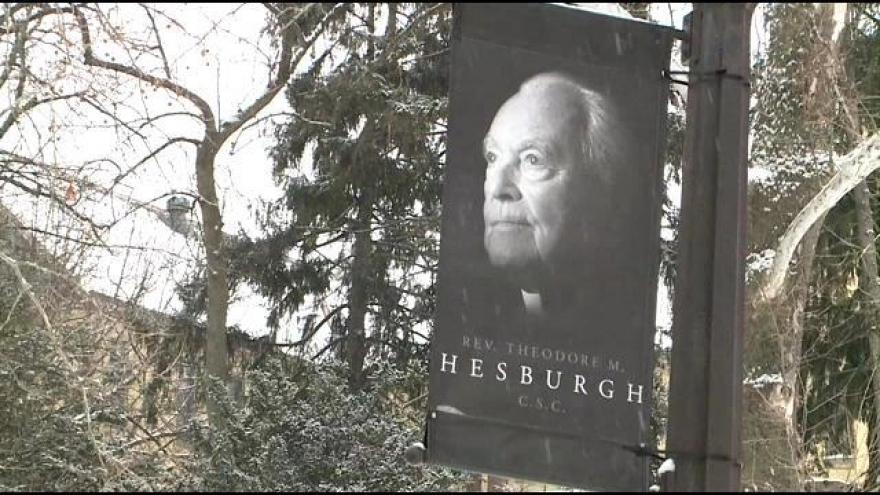 Father Hesburgh, President of the University of Notre Dame from 1952 – 1987 was 97-years-old when he died Thursday night.

Both President Jimmy Carter and his wife, former First Lady Rosalynn Carter will speak at the tribute.

“We are honored that the Carters, Dr. Rice and our other distinguished guests will join to pay tribute to Father Ted and his many contributions to national and international affairs, the Catholic Church and higher education,” Father Jenkins said. “This tribute will be a special opportunity to celebrate Father Ted's remarkable life and career.”

The tribute begins at 7:30 p.m. in Purcell Pavilion at the Joyce Center on the University of Notre Dame campus.

The tribute will include guest speakers and music from Notre Dame student choirs and instrumental groups.

A limited number of general public tickets will be available at 3 p.m. Tuesday at the Murnane Family Ticket Office at Purcell Pavilion.

You can also watch the tribute on the video boards at the Compton Family Ice Arena and on the website Hesburgh.nd.edu.

President Carter regularly turned to Father Hesburgh for advice and appointed him as chair of the Select Commission on Immigration and Refugee Policy. He also went to Southeast Asia on a fact-finding mission in the 1970s with the first lady that led to an effort that averted mass starvation among Cambodian refugees, according to the university.

In addition to serving as the 66th secretary of state, she was the national security adviser to President George W. Bush and a provost and faculty member at Stanford University.

Other guest speakers at the tribute will be: