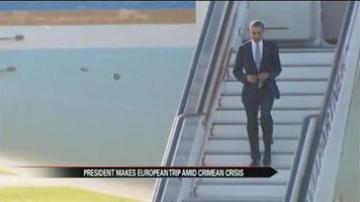 World leaders are coming together in Amsterdam to discuss several issues including Russia's annexation of Crimea.

The meetings come after an outbreak of violence at military bases there.

Monday, President Obama's week long trip kicked off with a meeting with the Prime Minister of the Netherlands.

Over the weekend Russian forces moved in forcing Ukrainian troops to surrender.

White House officials say there is no hope that Russia will withdraw from Crimea so the goal now is to prevent Vladimir Putin from pushing any further.

Putin has said there are no plans to push further.