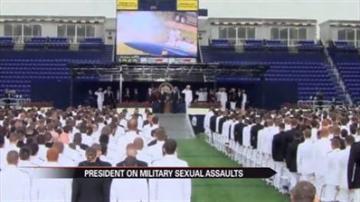 Annapolis, Md. -- President Obama addressed the US military sexual assault scandal during his commencement address Friday at the US Naval Academy.

The President's remarks come amid growing outrage over sexual abuse cases in the armed forces.

The latest statistics show the number of rapes and sexual assaults in the military have increased in recent years.

President Obama says it's a problem that undermines confidence in the American military.

"Those who commit sexual assault are not only committing a crime, they threaten the trust and discipline that makes our military strong. That's why we have to be determined to stop these crimes. Because they have no place in the greatest military on earth," said Obama.

They are accused of committing the same types of acts they were supposed to help stop.