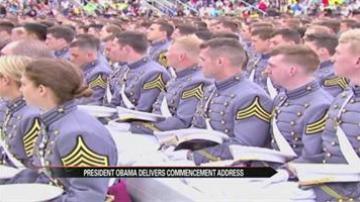 Standing before the nation's newest military leaders, the President announced he is shifting American foreign policy reposing an international effort to root out terrorist operations.

He called on congress to support a new counter terrorism partnership fund of up to $5-billion.

"For the foreseeable future, the most direct threat to America at home and abroad remains terrorism. But a strategy that involves invading every country that harbors terrorist networks is naive and unsustainable," said President Obama.

In his speech the President again stated he will not send American forces to Syria.