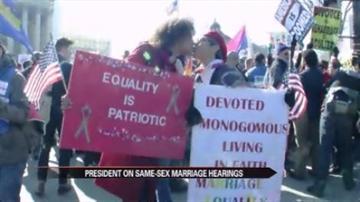 President Obama decided to weigh in on the Supreme Court hearings on same-sex marriage.

The President has called the Defense of Marriage Act unconstitutional but the Chief Justice was not impressed.

John Roberts says he does not understand why the president has not taken action but left it to the Supreme Court.

"I think it was appropriate for the court to weigh in on this issue. Obviously, public opinion has shifted dramatically just over the last several years. And my hope is, is that we will come to the place where everybody is treated fairly, and treated the same," said Obama.

The act prevents same-sex couples from having the same federal benefits as heterosexual couples.

The court is expected to rule this summer.