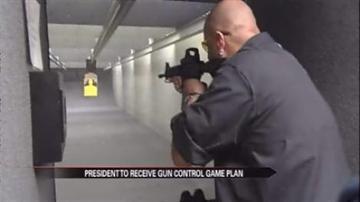 It's been one month since the tragic shooting at Sandy Hook Elementary and now the nation is in a heated battle over America's relationship with guns.

Tuesday, Vice President Joe Biden will hand the President his gun control game plan including stronger background checks for all gun purchasers, a ban on high-capacity magazines and a renewed ban on assault weapons.

"We don't think any of those things work," said David Keene, NRA President.