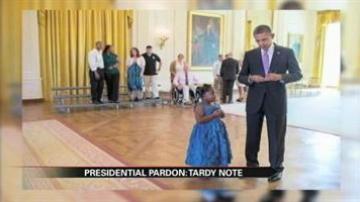 HATHAWAY, La. -- A little girl from Louisiana was excused from class by President Barack Obama.

Five-year-old Alanah Pouillard's mother was injured while serving in Afghanistan and he family was invited to the White House as part of the Wounded Warrior project last week.

A photo of Alanah has now gone viral. It shows the President signing her "excused from school" sheet.

"She went straight for him, I thought the Secret Service would stop her. No one approached her. and she jumped into his arms, threw her arms around his neck and gave him a hug and a kiss and then they were then maybe fifty feet away. I have no idea what they said," said Alanah's father Stacy Poullard.

Her mother is still recovering from her injuries sustained in battle.