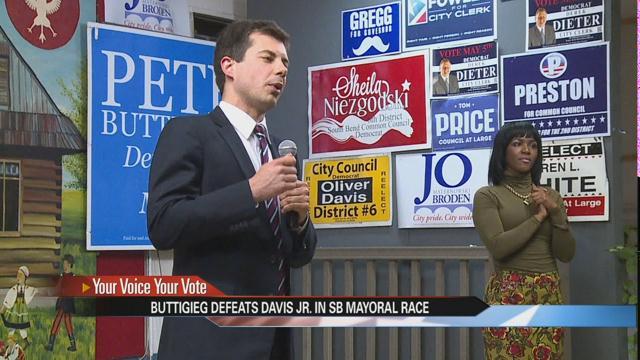 It was an exciting night at the West Side Democratic Club on Tuesday when Mayor Pete Buttigieg won the Democratic nomination for Mayor.

The mayor addressed the crowd first by saying a word of thanks but then he shared what he learned from his campaign.

“I believe if there is one resounding message left from tonight from the people of south bend its that we can all work together,” said Buttigieg.

Buttigieg also says he know this is just the first step and he's ready for November.

“This is just the primary, we got a race ahead," said Buttigieg.

The remaining question is will he have the support of his fellow Democratic challenger, Henry Davis Junior?

During Davis Junior's concession speech he told his supporters, no.

“Absolutely not,” says Davis Junior. “This current administration, this democratic party, has really made me feel like Democrats are not the party for me.”

But before the next wave of campaigning begins for both mayoral candidates in the general election, it was a night of celebration on the west side of South Bend.

In the general election, Buttigieg will face Republican Kelly Jones in the mayoral race.