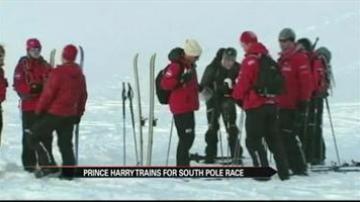 He has fought in Afghanistan and commanded helicopters but now Prince Harry is taking on a new heading to the South Pole.

Tuesday he battled a mock snowstorm in a subzero training chamber with temps dipping as low as 49 degrees below.

This was all in preparation for a race to the South Pole for his favorite cause, supporting wounded soldiers.

"Hopefully we've shown people what is the art of the possible,” said Harry.

The 16-day race across the South Pole will pit the prince's UK team against teams from the United States and Canada.

The captain of the U.S. team will be true blood actor Alexandra Skarsgard.