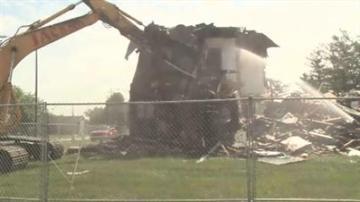 MISHAWAKA, Ind. -- In just a few short hours Thursday, the Princess City Apartments were torn down, much to the delight of residents in the neighborhood.

Neighbors near the now-demolished Princess City Apartments can sum up their feelings in one word:

The giant claw crunched the walls, shattered windows, and dropped the roof to the ground.

"I'm just glad it's coming down and maybe we can get something nice in there. Even if it's homes, I'm sure it'd be something different,” said Neighborhood Watch captain Wilma Barnes.

Homeowners down the block complained to the city for years.

"This subdivision has been here since 1965 and it's really brought the property values down,” said Carmichael.

Once water started cascading over the electrical box like a water fall, the city condemned it for black mold, roaches, bed bugs, and much more.

"When friends and relatives come by and they turn on that corner- I always say turn by the tacky apartment building,” said Carmichael.

Rubble that will eventually be piled into trucks and driven away.

"I just feel for the people that were living there. And the way they was treated because it wasn't right,” said neighbor Terry Manning.

The city of Mishawaka says it will be an empty lot for a while.

Miller still owns the property and can walk away from this with just a slap on the wrist.

The city hopes to eventually acquire the land and maybe put in single family homes, but for now-- they're negotiating.