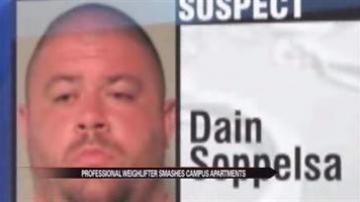 MICHIGAN -- He's not the Hulk but one man started smashing apartment doors at random on a college campus.

Police say the man who is a professional weightlifter made his way around campus terrorizing witnesses at Adrian College in West Michigan.

He broke door frames, busted hinges and toppled furniture in what witnesses called a violent rage.

Police say he is not a student but was visiting one but they do not know why he lost his composure.

"We attempted to speak with him. He became irate, came at one of the officers swinging his arms and he was tasered and taken into custody," said Adrian Police Chief Vincent Emrick.

The professional weightlifter is from Kalamazoo and weighs nearly 350 pounds.