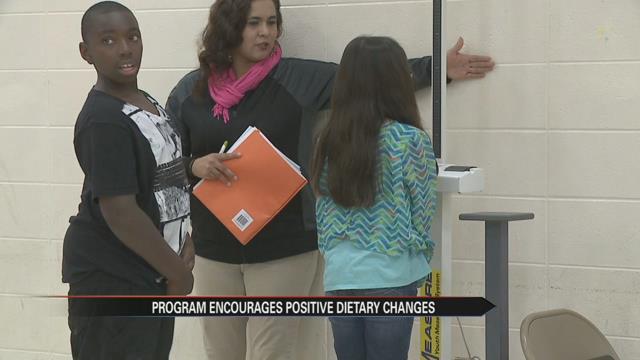 The Northern Indiana Hispanic Health Coalition is running a program called Healthy Hearts which started in Elkhart in 2014 at Hawthorne, Roosevelt, and Monger Elementary.

After seeing positive changes they added Beardsley Elementary where on a Wednesday morning you can find fourth graders playing with their food.

“My favorite part of the Healthy Hearts program is doing all of the hands on stuff,” says Dalton a fourth grader at Beardsley Elementary.

Generally students fiddling with their meal instead of eating it would be frowned upon but a group of fourth graders explain what they are learning.

“It’s helping us learn what is healthy and what is not,” says Evelyn.

This is the second year the Northern Indiana Hispanic Health Coalition is giving a six week hands-on course to four title one schools in Elkhart.

“The Healthy Hearts program is basically a program to help reduce childhood obesity. They are learning new concepts like how to read labels,” explains Flor Valdez, Program Coordinator with the Northern Indiana Hispanic Health Coalition.

During a Healthy Hearts session you see many hands in the air waiting to ask or answer questions. Students show a strong interest in the new concepts and teachers say the lessons fill a void.

“You can read from a textbook, show them all the statistics and stuff like that but when they actually see it, it’s really eye opening,” explains Todd Dowiat a teacher at Beardsley Elementary.

Another eye opening experience for Hawthorne Elementary school principal Mary Teeter was discovering 60 percent of her students were overweight.

“It’s quite disturbing to find out so many of our kids are not in the right weight at such a young age,” says Teeter.

Healthy Hearts coordinators track the progress of about 900 students measuring weight, height, and body mass indexes at the beginning and end of the year. Although they did not expect to see much change until the third year of the program they were surprised by the numbers.

“We are already seeing changes in BMI - In a class of about 20 I would say maybe 17 or 18 will in some way show an improvement,” says Valdez.

The young students do not care too much about the data but are able to explain a change in their life style.

“Before I was in this program I was the junk food habit kind of guy,” says Dalton.

When asked what is a big part of his new diet Dalton was very specific.

The Healthy Hearts program runs off grant money. The Northern Indiana Hispanic Health Coalition is currently awaiting a grant from the Elkhart County Community Foundation. That money would be used to expand into more schools in Elkhart and continue the program in the current schools.