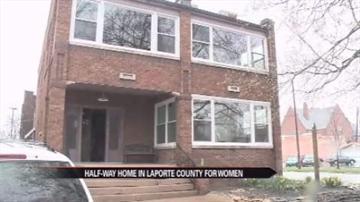 La Porte, Ind. -- It's a message of hope from one former female addict to another. A La Porte woman is trying to change her community and help women like herself.

More than a year ago, heroin use hit an all time high in LaPorte County and the drug problem coincided with the number of women constantly in and out of prison. That is where Sonshine began her mission to help and change her community.

When we first visited Sonshine a year and half ago, she was giving us a tour of the site that would become the first ever women’s recovery home in LaPorte County.

Now the progress, supported solely by donations, can be seen and felt.

"We've done about $80,000 worth of demolition with the help of 210 community volunteers," says Daniela Troche who's better known as Sonshine.

Walls were removed creating a wide open space and nearly everything was gutted. A new roof,a new staircase, and 40 new energy-efficient windows were installed, but the job is far from finished.

"We have a lot more to go," says Sonshine. "As much as we get excited about the work we have done, there is so much more work that needs to be done."

The work does not end inside the walls of the home, there is much more to do in the LaPorte community she is trying to help.

"We have one of the biggest heroin problems in the county and some of that has subsided, but we still have a tremendous drug problem," says Sonshine.

She works with women released from prison, keeping them drug free and on the road to a new life and she says it's working.

Compare that to the 85 percent it once was and the success of the program is evident.

Sonshine says the women she works with have roughly six arrests by the time they come to her.

That 46 percent stayed out of cuffs and out of jail for three years straight and Sonshine says that is a huge accomplishment for these women.

Now the community is recognizing her contribution.

"It's humbling, but it's also exciting because I know the lives that are attached beyond those awards."

Sonshine has received five awards in the last year for work. She just started her own radio talk show in town and is now doing a documentary to help raise more money for the home.

Still, she needs thousands more to complete the $260,000 project.