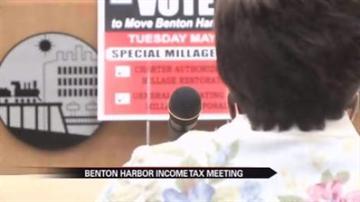 BENTON HARBOR, Mi.-- To save the city from bankruptcy, commissioners want to impose a city wide income tax. This money will be used for public safety and infrastructure.

Residents would not only see better roads but a program would also be put in place to create jobs and provide training.

Marcus Muhammad said, “That will stave off bankruptcy or even stay in dissolve. So I think this is a 'dough [sic] or die' move.”

Mary Alice Adams said she is willing to make the financial sacrifice to save the city she loves.

Adams said, “I can’t believe things have shifted the way that they have. I’m just wondering how are we going to get out of this? I feel like I’m being ran out of my own city on the outside looking in and that I refuse.”

Members of the community expressed their concerns over whether the money would be handled properly.

Benton Harbor declared a financial emergency in 2010 and they are between $2 and $3 million in debt.

This income tax over ten years would mean over $20 million in revenue.

The commissioner says it's a game changer.

Muhammad said, “I think this is the biggest legislative move ever for the city of Benton Harbor and I think other cities are watching closely. If it passes in Benton Harbor I think that it will set off a ripple effect on the west side of Michigan.”

City council members will vote on the ballot language Monday.

If it passes, the one percent tax proposal will go before voters in November.

The commission wanted to make clear that they weren’t attacking corporations with this proposal but that they believe it's essential to the city’s growth.