Proposal to save Avon Theatre from demolition rejected 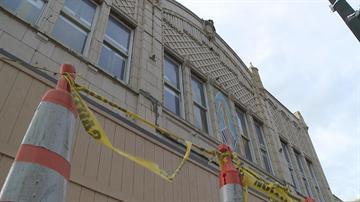 SOUTH BEND, Ind. – The South Bend Common Council voted 8 to 1 to reject a proposal to declare the Avon Theatre a historic landmark and prevent its demolition at their meeting on Monday.

The vote clears the way for plans to tear down the theatre, located at 307-309 South Michigan Street, as part of a plan to expand the St. Joseph County Public Library.

Those who supported saving the Avon Theatre tried to convince the council that the building, constructed in 1926, was a unique piece of architecture and a valuable piece of South Bend’s history.

“Movie houses like the Avon were uniquely built and designed, no two were alike,” South Bend Historic Preservation Commission President Tim Klusczinski.  “You won’t find another in South Bend or across the nation.”

Representatives for the St. Joseph County Public Library argued that the building has sat vacant for decades with no other businesses or occupants willing to move in.

Additionally, they pointed out that rehabilitating the theatre would be costly, if not impossible.

“Prior to the library’s purchasing the building there was interest shown in that theatre by a local theatre group and it was determined then that the building was in such bad condition that it was not economically feasible to restore the building for use as a theatre,” explained James Masters, an attorney representing the St. Joseph County Public Library.

In the end council members said they agreed that historic preservation is important, but weren’t willing to force the library to pay to preserve the building and voted down the proposal to declare it a historic landmark.

However, some parts of the building will survive, the library board also met on Monday and voted to hire a contractor to take down and preserve the theatre’s facade for future display.