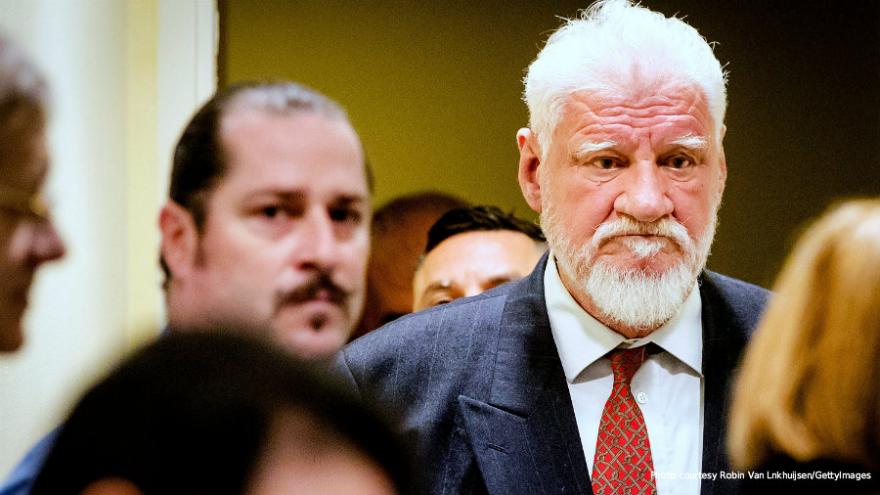 (CNN) -- The convicted Bosnian Croat war criminal who died Wednesday after drinking a vial of poison as a judge upheld his 20-year sentence died of heart failure, according to the Dutch Prosecution Service.

"The preliminary results of the toxicological test showed that mister Praljak had a concentration of potassium cyanide in his blood," Dutch prosecutors said in a statement Friday. "This has resulted in a failure of the heart, which is pointed out as the suspected cause of death."

The substance ingested by Slobodan Praljak was previously unclear.

Two Croatian experts were permitted to observe the autopsy, which was conducted Friday, the Dutch Prosecution Service said.

Praljak, a former Croatian general who was sentenced in 2013 to 20 years in prison for war crimes committed during conflicts in the Balkans in the 1990s, drank the poison as The Hague judge reaffirmed his sentence.

"Slobodan Praljak is not a war criminal," he shouted as the verdict was read. "I am rejecting your verdict with contempt."

Footage from the courtroom shows Praljak tilting his head back and drinking from a vial. The judge asks him to sit down before he says, "I have taken poison."

Proceedings were immediately suspended, and Praljak was taken to a hospital where he died, the International Criminal Tribunal for the former Yugoslavia (ICTY) said Wednesday.

Wednesday's appeal hearing was the final ruling for the UN tribunal, which will formally close at the end of this year.

The appeal judges also reaffirmed the sentences of five other Bosnian Croat leaders for crimes against humanity and war crimes and almost all their convictions, including the rape and murder of Bosnian Muslims.

Their offenses took place between 1992 and 1994 following the breakup of the former Yugoslavia in the early 1990s. An earlier trial implicated the Croatian regime under then-President Franko Tudjman, who died 1999, in a criminal conspiracy with the goal of "ethnic cleansing of the Muslim population" of parts of Bosnia to ensure Croatian domination.