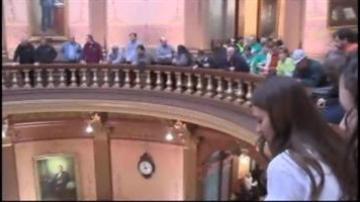 LANSING, Mich. -- Michigan state capitol building on lock-down because of protests against a "Right to Work" proposal.

Protesters packed the Michigan capitol building in response to the governor's plan to introduce a "Right to Work" status in the state.

Michigan's Governor Rick Snyder had avoided the issue for two years because it was divisive. But has changed his opinion.

"It's time for a call and my call is asking for Workplace Equity and Fairness Act to be enacted in the next few days so we'll have a more effective Michigan, a brighter future, more and better jobs and a future for our kids," Snyder said.

If Michigan lawmakers approve the measure, the state would become the 24th right-to-work state.

In right-to-Work states, workers are not required to join unions.

State police say there are several thousand people in around the capitol.

Eight people have been arrested.

Those people could face charges for assault and disobeying a lawful order from the state police.