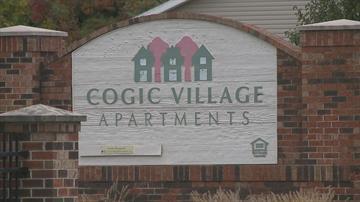 BENTON HARBOR, Mich. - There are claims that management at a low income apartment complex in Benton Harbor is racist.

Monday afternoon protesters took to the Church of God in Christ Village Apartments (COGIC) on Territorial Drive. Claims made by the protesters include mistreatment of employees and tenants based on race.

He claims that the building manager, Kim Hunt, fired him as a contractor at the complex because he is black.

I was a contractor here for eight years and she lied on me and got my job taken away from me.”

“She basically attacks the black residents that are here,” said former NAACP President Fred Pinkney. “If you say anything back to her you’ll get a notice to move.”

Both Pinkney and Branch said Hunt is known among residents and employees as someone who uses racial slurs and threatens evictions on tenants.

Community Church of God in Christ

“I did get some complaints,” said Pastor Nate Wells III of the Community Church of God in Christ in Benton Harbor.

The Community Church of God in Christ had an ownership in the COGIC Village Apartments when it was built in 1995.

Wells said that the church partnered with the former owner, Sterling Group in South Bend, and owned 20 percent of the complex. The church cut ties with COGIC when it was sold to Eagle Point Companies four years ago.

Wells said that the church didn’t have control in the operations of the apartment when it did have a share of ownership, but many still believe the parish has some control and have come to Wells with complaints.

“I do know that they have had a problem with this manager,” Wells said, referring to a pipe bomb detonation in April.

April 19, 2012 a pipe bomb was detonated at COGIC Apartments.

According to police, the bomb was placed in the window of the rental office. Nobody was injured but a piece of debris broke a window at an adjacent apartment building.

Residents of COGIC Village Apartments told ABC 57 News in April that several eviction notices were given the day before and they believed retaliation played a role.

“I guess it was a statement being made,” said resident Dondrell Jefferson in April.

“Somebody was probably trying to retaliate,” said Ollie Williams, another resident.

The suspect and motive behind the bomb is still not known.

ABC 57 News got no comment Monday at the rental office at the COGIC Village Apartments. Calls were made to Eagle Point Companies and have not been returned.

Pinkney said he plans to file a class-action lawsuit against Hunt and COGIC Village Apartments.