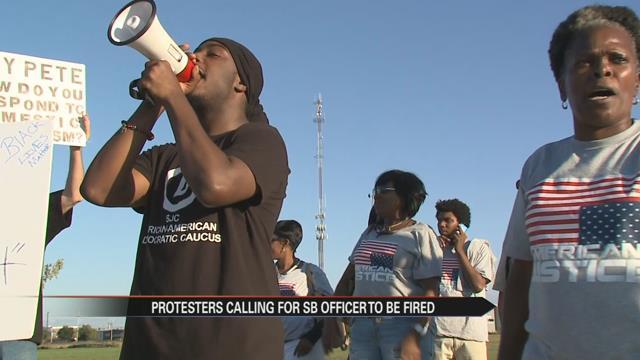 Jacquelyn Moody is a long time South Bend resident and showed up to protest.

“I think he should be fired off the force,” said Moody.

The officer at the center of a storm is Aaron Knepper of the South Bend Police Department.

Knepper has been involved in multiple civil rights lawsuits.

Three officers, including Knepper, illegally entered his home in 2012 without permission.

They punched and used a taser on the teen, who was sleeping in his bed.

Blu Casey has been the voice of recent protest and is leading the charge for the Franklin family.

“Nothing good comes from rushes to judgment. Decisions about officer discipline are made through a legal process, based on an administration recommendations and board of safety procedures. These decisions are based on a fair and public hearing of evidence, not on popular opinion, and officers are not disciplined twice for the same case. Chief Ruszkowski and his command staff have led the department to considerable progress on sensitive issues, and this progress will continue,” said the Mayor.

“If there is a process, process it. There’s no reason that this happened in 2012 and 2016 he still hasn’t been processed,” said Casey.

The South Bend Board of Public Safety will meet for their monthly meeting Wednesday tomorrow at 9am. Even though this topic is not on the agenda, they are the only ones who can decide the ultimate fate of Officer Knepper.