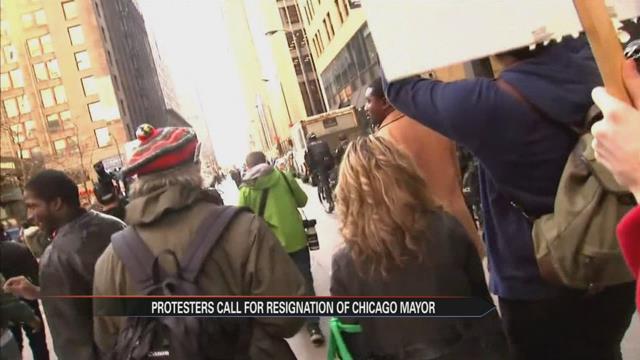 Protests continue in Chicago as many are calling for the resignation of mayor Rahm Emanuel.

The group dissipated to a few hundred folks during the evening when they took their rally to the Chicago Police Department Headquarters on the city’s south side.

They addressed the department’s board members  calling for an end to what they say is systemic racism throughout the city’s government.

“Rahm’s not taking responsibility,” said Jason Ware, co-organizer of Black Youth Project 100. “Right now he’s trying to save face but he’s not taking accountability for any of the police violence.”

It’s been almost two weeks of protesting for some Chicagoans.

Wednesday night, they took their concerns to police headquarters to address what they’re calling a poor quality of life for many.

“We’re dying from police and from food deserts and from closing schools,” said Ware.

The latest round of protests started downtown in the heart of the city following an apology from Mayor Emanuel.

“I take responsibility for not only that but to also fix it,” said Emanuel.

Many felt it should no longer be mayor Emanuel’s responsibility to fix it and are asking for more than just an apology.

“It looks like it won’t stop until we get a new mayor because the one that we have will be gone and when [Prosecuting Attorney] Anita Alverez is gone too,” said protester Damond Singleton.

Until then, these protesters promise to continue to put the pressure to the city government for a change they say is a long time coming.

“It’s time for the city to take care of the entire city not just the rich and the wealthy,” said Singleton.