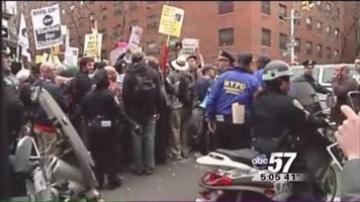 NEW YORK, N.Y. -- It's been six months since the ‘Occupy Wall Street’ protests started in New York City and Saturday it was a protest of a different kind.

A large group of people gathered at Zuccotti Park where it all started. They marched to the police department headquarters and sounded off against police tactics.

They claim that officers used excessive force on several occasions, during the protest.