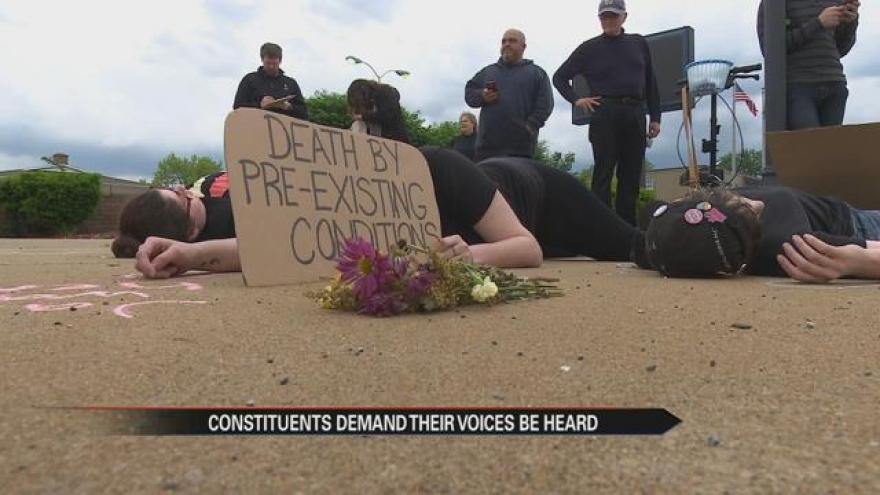 Angry residents took to her Mishawaka headquarters demanding their voices be heard.

They say they held a die-in demonstration this time to show the congresswoman what’s at stake.

“You’ll notice we didn’t want to die, we don’t want to lie down...” said Lisa Casey, a resident who lives in the district. “We wanted to send a message to Congresswoman Walorski that this is important to us and shine a light on what the bill she voted for actually does.”

Organizers say the die-in represented the actual deaths they believe will happen under the American Healthcare Act if Medicaid is phased out.

Right around the time these folks took to the streets, the Congressional Budget Office weighed in on the bill.

The report anticipates about 14 million currently covered would be uninsured as soon as the bill is signed into law.

It also estimates nine million more would lose coverage by 2026.

But the report also had good news.

According to the CBO, the bill would cut the deficit by $119 billion in over a decade.

In a statement sent to ABC 57 News, she said:

“Too many Hoosiers are facing higher premiums, fewer options, and collapsing system under Obamacare. Four of the eight insurers on Indiana’s exchange withdrew this year, and a new report shows premiums in Indiana have gone up 74 percent since 2013. The CBO today again confirmed that the American Health Care Act will provide relief to Hoosier families by lowering premiums over the long term. I look forward to continuing to work with my Senate colleagues to send the president a bill that repeals Obamacare and replaces it with a patient-centered system that protects those with per-existing conditions and ensures access to quality, affordable health care.”

But some wished she relayed that message in person.

Constituent Rose Tinder O’Brien dressed in the same outfit she wore to her daughter’s funeral just two weeks ago.

They’re on Medicaid which she says doesn’t cover the medical attention her daughter needed during a fatal hypoglycemic episode overnight.

She’s now has questions for Walorski.

“Why we don’t deserve the same insure she has?” she said.