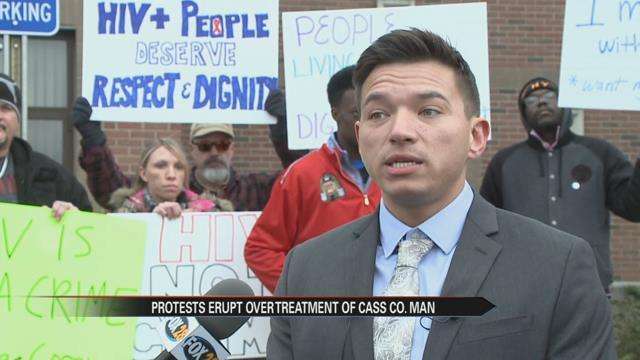 Protesters gathered outside the Cass County Courthouse Monday afternoon to support a Dowagiac man who says he is being discriminated against because he is HIV-positive.

More than one dozen protesters shouted chants like this outside the Cass County Courthouse Monday, ahead of a hearing scheduled for Corey Rangel.

“Everything’s been going really well, for about nine months, up until this incident,” Rangel said.

In mid-March, Rangel was pulled over in Cassopolis for having a loud muffler.

He’s a convicted felon who has been going through the Cass County drug treatment program after pleading guilty to three drug charges.

When he was pulled over, it was past his curfew and he didn’t have proof of his insurance or his glasses, which he needs to drive.

He was cited, and then he reported the incident to his probation officer.

“Later on that day is when I came back and they told me that I was going to be taken into custody and that I needed to give them my phone,” Rangel said.

The director of Dowagiac Public Safety confirms that, saying, in part, that an agent with the Michigan Department of Corrections tipped off Dowagiac Police that pictures of a sexual nature were on Rangel’s phone.

According to Steven Grinnewald, Dowagiac Police officers called two individuals who showed up in the photos.

“…to question people in my phone, my contacts, about my HIV status and their ages and whether or not I was having sexual relationships with them,” Rangel said.

Nico Santana was one of them, and he said the officer spoke vaguely to him.

“It was more, [the officer] brought it out of me,” Santana said. “Asking if I knew about [Corey], and that’s when, cause I didn’t want him to construe words, [or] make any kind of guilt, I said, ‘Oh, his status, you mean that he’s HIV-positive, undetectable,’ and he’s like, ‘Yeah, that.’”

Dowagiac Police say officers never revealed Rangel’s HIV status to anyone, which would have violated a Michigan law; telling ABC 57 they also explained that to Rangel.

Shortly after this, Rangel said he got kicked out of the drug treatment program, which violates his probation and could put him back behind bars.

“I worked really hard this past year and I just want to be treated equally and with respect,” Rangel said.

He and his supporters feel he was removed from the program because of his HIV.

“This is about his HIV,” Kelly Doyle of the Michigan Coalition for HIV Health & Safety said at the protest. “He is being discriminated against, absolutely.”

At Monday’s court hearing, the judge agreed to adjourn Rangel’s case for a few weeks so that facts can get sorted out.

The prosecutor would not comment on camera about the case.