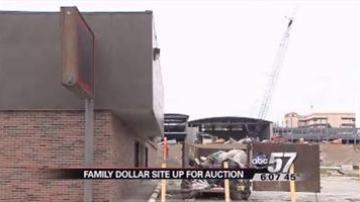 SOUTH BEND, Ind. – Another attempt at auctioning off the Family Dollar property at 717 East Lasalle Avenue is on the table; the city hopes it will be acceptable to the federal court.

This will be the third time the city has tried to get rid of the property since purchasing it earlier this year.

At first, the city tried to turn the land over to the catholic diocese to help with the development of the new St. Joseph High School being built nearby.

The land was to be turned into a portion of the school’s football stadium and a deal with the school would have granted access to the stadium and surrounding areas to the public during times when school activities were not already scheduled.

However, as South Bend Common Council members prepared to take action on the proposal that would purchase the land for $1.2 million, several South Bend residents threatened to bring forward a lawsuit against them.

That is exactly what happened after the approval of the purchase and transfer. The original plan to turn the property over was blocked in federal court.

The city immediately started looking for another option for getting the land into the hands of St. Joseph High School, the Catholic Diocese, or anyone who was willing to use the land to promote the new school and the economic development plans for that area.

This prompted St. Joseph High School to bid on the property. But the sale was once again blocked.

This time the federal court said the bidding process was too biased in favor of the religious organization.

So the city went back to the drawing board again. Their latest plan for off-loading the property calls for a simple auction.

Under the current plan, the property will be auctioned off to the highest bidder, as is - where is. The only string attached is a common one. “The statute says, we have to sell it to the highest and best bidder. We are interpreting best simply to mean someone who has the financial capacity to follow through with the sale,” said Chuck Leone, City Attorney for the city of South Bend.

This opens the door for anyone who wants to purchase the land for any use. They do not have to give it to the school or use it in conjunction with it.

The starting minimum bid for the property will be $545,000. This is more than the average of two appraised value of the land, and less than half the amount the city paid to purchase the land and buy out the building’s owner and the people leasing the building.

Whether or not the federal court accepts this new proposal for auctioning off the property, the city will eventually have to decide what to do about the precedent the current litigation has potential to set.

Leone voiced concerns about how such a precedent could hamstring the city’s ability to conduct economic development projects in the future. “We feel under the courts current orders, that we are somewhat constrained in that we cannot engage in the same kind of interactions, provide the same kinds of incentives, we would with a for profit entity, or a non-profit non-religious entity,” said Leone.