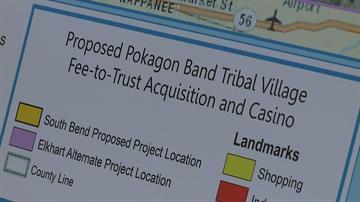 SOUTH BEND, Ind. – Residents got their first chance to go on the record about development plans that could potentially bring a casino to South Bend at a meeting at the Century Center on Thursday night.

The Pokagon Band of the Potawatomi Indians have made a proposal to build a Tribal Village on 164-acres owned by the tribe just south of the intersection of State Road 23 and Locust Road.  The plan includes building 44 housing units, a multipurpose facility, health services buildings, tribal government facilities and a class III gaming facility with a hotel, restaurants, meeting space and parking.  According to tribal representatives, the casino is not a top priority and the tribe just wants to keep its future options open by getting approval to potentially build one.

“The Pokagon Band’s Indiana residents, particularly our elders and low-income citizens, face significant challenges in finding suitable housing and accessing our health, education and family services programs,” Matt Wesaw, Chairman of the Pokagon Band, said in a statement.  “As a result, we are evaluating potential projects and initiatives that will serve our citizens, as well as area residents including members of other Native American Tribes, and the state.”

Though the Pokagon’s say the casino is not their focus, it was for citizens who came out to speak about the Tribal Village plan on Thursday.

“We have a casino in New Buffalo, you have a casino Hartford, we have casinos in Michigan City, we have casinos on the south side of Chicago and all the way over to here I do not see the purpose of bringing that kind of environment into our neighborhood,” said concerned resident Ronda Richards.  “Crime has gone up in Hartford; crime has gone up in New Buffalo.”

Concerns about the potential effect a casino could have on crime, property values and other areas of the community where shared by the majority of those who spoke.

“I’m a retired dealer from Michigan City, I saw what gambling does to people,” explained resident Mike McFarland.  “I would describe my job as take their money, give them chips and take their chips.”

While most were opposed to the possible casino, all those who gave input supported the rest of the plans for the tribal village.

But, there wasn’t just criticism, some did voice support for a gambling facility because of its potential to help the local economy.

"The hundreds of construction jobs, the thousands of future operational positions will employ many workers and feed many families,” claimed St. Joseph County Commissioner Dave Thomas.  “The payroll taxes, the gaming revenue and many other economic benefits are also most welcomed."

Despite the Pokagon’s statement that the casino wasn’t their focus and may not even be built if the plan was approved.  Many said any proposal involving a gambling facility should be rejected.

“They're going to apply for a gambling casino sure as there's a moon,” said Sal Gerschoffer, who lives near the proposed site.  “Let's leave that to Michigan City or New Buffalo or Hartford, leave the gambling over there."

The plan is far from approval, Thursday’s meeting was only the first public forum in the Bureau of Indian Affair’s process of putting together an Environmental Impact Study (EIS) on the plan that will eventually be considered by the bureau.

“It can take anywhere from 18-months to 2-years just for the environmental portion of it,” explained Scott Doig with the Bureau of Indian Affairs.  “This is the absolute very beginning of this process.”

Those who couldn’t attend Thursday’s meeting are invited to submit written comments about the proposal to the Bureau of Indian Affairs with a deadline of October 9, more information on how to do that can be found here: www.federalregister.gov/articles/2012/08/24/2012-20833/notice-of-intent-to-prepare-an-environmental-impact-statement-for-the-proposed-pokagon-band-tribal#addresses