Pulaski County Deputy talks for the first time after being attacked 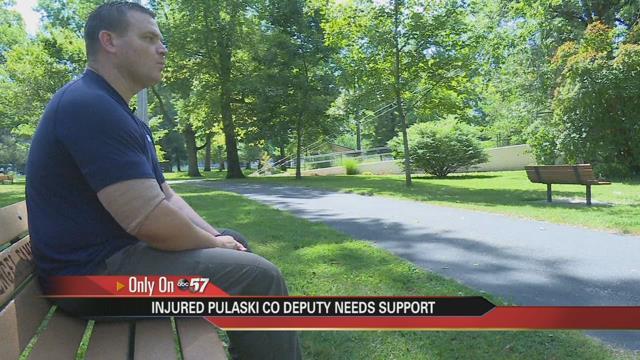 “I feel pretty good I’m up moving around,” said Bowyer.

Four Pulaski deputies, including himself and one Starke County officer and his k-9 were trying to catch a suspect on August 1st. Then, things took a turn for the worse.

“I was walking back to my car to get my squad car head north and I was probably 10-15 feet away from the canine. For some reason, it decided to bite me for some reason not much to say,” said Bowyer.

The K-9 severely bit his right arm. He was taken to Fort Wayne Parkview hospital and underwent two surgeries. Now, he’s recovering but can’t get back to work. So his sister and girlfriend made a GoFundMe page.

The page has been shared more than 500 times and he’s already received over $1,000 in donations.

“It’s been pretty cool to see the support from the local community as well as all over the state. I’ve received several messages on Facebook from officers all over the country saying get well,” said Bowyer.

He’s feeling thankful for all of the support.

“I’d just like to thank everybody that supported me. It’s tough going through something like this,” said Bowyer.

Donations can be made to Deputy Bowyer and his family at https://www.gofundme.com/2zgpp978