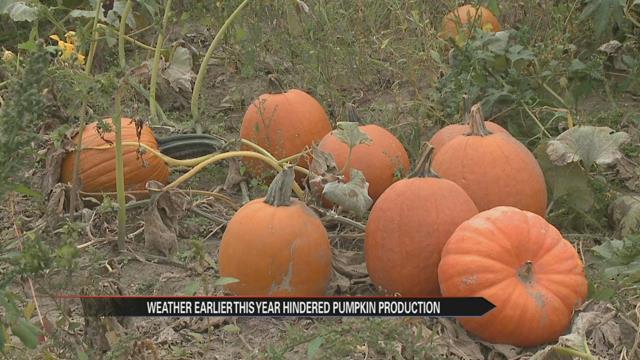 A summer full of rain is showing its effects this fall as local farmers are seeing less orange in their fields and others are not seeing any at all.

Kevin Bullard, owner of Bullard’s Farm and Market in Elkhart says it has been a rough year for pumpkins but feels lucky to say they have some.

“The pumpkins this year are fewer in numbers and smaller in size,” says Bullard.

Bullard says he can typically get 3,000 to 4,000 pumpkins on six acres of land. This year he grew on eight acres and didn’t see a boost in orange.

Turns out, he has more than what some other farmers grew.

“Through people calling us, they are asking to see if I can wholesale some or provide them with some of the pumpkins that we have grown. Because some of the local growers have shortages or have been whipped out,” explains Bullard.

Steve Engleking an educator with the Purdue Extension LaGrange office says the frequency of rainfall in June created a breeding ground for a fungus to grow on crops planted in June, like pumpkins.

Bullard didn’t see signs of fungus but says all the rain did make it challenging.

“We had a lot of rain in June and that flooded out washed out a lot of the different plantings of pumpkins,” says Bullard.

So to plant enough pumpkins Bullard had to think outside of the box.

“I planted more in stages at different times to try to avoid the shortage that we are seeing this year,” says Bullard.

The combination of 30 years experience and a little luck worked for Bullard’s farm.

“It’s rewarding to see that you dodged a bullet and we able to have a good crop. If you do things a little bit different and tweak it a little bit you will have some good luck,” says Bullard.

Bullard predicts a small bump in business providing pumpkins to some of the other farms whose crops did not yield pumpkins.

The market will be open until the end of October with pumpkins for carving, decorating, and even sweeter squash like pumpkins that can be used for cooking.