Push to legalize marijuana picks up steam in Michigan 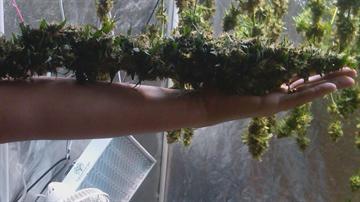 NILES, Mich. -- A push to legalize marijuana is picking up steam in Michigan.

This week, a group called "The Committee for a Safer Michigan" will start collecting signatures. Members want to make it legal for anyone over 21 to have a small amount of marijuana -- without a prescription!

ABC 57 News spoke with a Niles couple today that is supporting the movement. The group said their story is an example of the problem with Michigan’s current medical marijuana law. For the purposes of this story they will be called “Jack” and “Jill”.

Jack and Jill spoke to ABC 57 News anonymously because their lawyer advised them to do so. The couple was charged with marijuana possession even though Jill had a prescription for the drug and Jack was her legal caretaker.
"I was just shocked by how well these things worked for her," said Jack at his Niles home.
Jill is diagnosed with Hepatitis C, an incurable disease. She takes four different prescription drugs every day and the side effects are debilitating."I had weakness, I had nausea, lack of sleep (and) swelling," she said.
In 2008, Jill easily got a prescription for marijuana. She was not previously using the drug. "It was a miracle,” she said. “I was able to sleep through the evening. I was able to get rid of the feeling of (nausea)." After using marijuana, Jill was able to get off the prescription drugs.
Jack built a grow room in the basement of their home. The couple grew 12 plants, the legal limit, but the plants produced more marijuana than was legal. They were caught and arrested by the Michigan State Police.
"People who are honest and well intentioned have gotten into trouble for technical violations that they didn't understand and didn't thing was a big deal," said Matt Able, the campaign director for the Committee for a Safer Michigan.
"(The Medical Marihuana Act of 2008) was intended to shield patients from criminal liability but it's being used by prosecution to cut them up because they're violating some technical provisions of the law," said Able.
Jack and Jill said they've had to pay $25 thousand in fines and court costs for their mistake. "We are good citizens, maybe the best in the city of Niles,” said Jack. “Here we are in the court system, tying up the court, tying up the Michigan State Police, the sheriff’s department, tying up prosecutors, for what?"
The campaign would require more than 300 thousand signatures to put a legalization measure on November’s Ballot. The group has until July to obtain signatures.
Share this article: