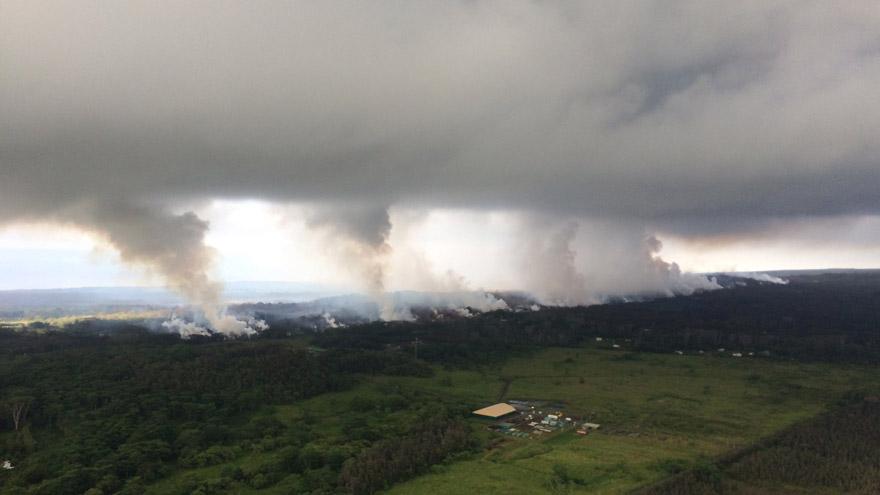 The strongest shaking was recorded around 8:30 a.m., measured as a 4.4-magnitude earthquake. The floor of the summit crater has also dropped about three feet (90 centimeters), as the threat of a strong, explosive eruption at the top of the volcano loomed. The ground was deflating as the crater's lava levels fell, causing stress faults around the crater to move, resulting in the earthquakes. More were expected.

Ash streamed from the summit at Hawaii's Kilauea volcano, though emissions decreased from Tuesday.

There were occasional bursts of ash coming from the crater causing ash to fall downwind to several communities, though there were only trace amounts, said the Hawaiian Volcano Observatory. Ash plumes on Tuesday had spouted as high as 12,000 feet (3,657 meters) into the air, scientists said.

These plumes are separate from the lava eruptions happening roughly 25 miles (40 kilometers) away from summit, where about 20 lava fissures have destroyed more than two dozen homes and forced the evacuation of about 2,000 residents.

Dense, large rocks roughly two feet in diameter (60 centimeters) were found in a parking lot a few hundred yards away from Kilauea's summit crater, which reflect the "most energetic explosions yet observed and could reflect the onset of steam-driven explosive activity," the Hawaiian Volcano Observatory said in a statement, and continues to monitor activity.

Cracks formed on a highway near the entrance to Hawaii Volcanoes National Park, said the Hawaii Police Department. Much of the park remains closed.

"We're all safe, and I wish they'd open the park back up, but they have to keep it safe for everybody," said Ken McGilvray, an area resident. "We live on a volcano!"

Hawaii Gov. David Ige said the state is forming a joint task force that could handle mass evacuations of the Big Island's Puna district if lava from Kilauea volcano covers major roads and isolates the area.

Hawaii Army National Guard Brig. Gen. Kenneth Hara, the task force commander, said he's anticipating potentially having to evacuate about 1,000 people, based on what he's been told by Hawaii County. But he said some people may choose to stay behind because they are self-sufficient.

Hara said there are currently about 1,200 soldiers and nine UH-60 helicopters currently training on the Big Island. He may also request forces from the U.S. Pacific Command if needed.

On Tuesday, the volcano discharged ash because of rocks falling into the summit, U.S. Geological Survey geophysicist Mike Poland said.

"There is very little wind at the summit," he said. "The plume, it's not near as ashy as it was yesterday, and it's rising more or less vertically over the summit region."

Because of the ash, USGS scientists operated from a backup command center at the University of Hawaii at Hilo.

Poland did not have an immediate height on the plume Wednesday since scientists were not staffing the observatory at the summit. They will have to rely on remote observations, he said.

"Things seem to be progressing largely as they have been, except for a shift in wind and less ash," Poland said.

Scientists remained on alert for more violent activity. Geologists have warned that the summit could have a separate explosive steam eruption that would hurl huge rocks and ash miles into the sky. But it's not certain when or if that might happen.

For those on the ground near the lava vents, health warnings were issued because of dangerous volcanic gases.

An air-quality alert was in effect for an area near the Lanipuna Gardens subdivision. That area was evacuated shortly after the eruption began May 3. Most fissures are in that subdivision or the adjoining Leilani Estates neighborhood.

Several fissures remained active Wednesday, producing lava spatter. Lava from one fissure that had been clearing a path toward the ocean, about 2 miles (3 kilometers) away, had not advanced in the last 24 hours.