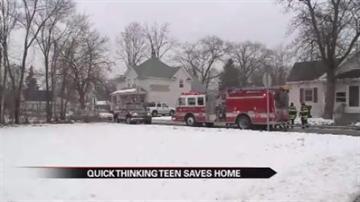 Fire investigators say a family pet bumped a pan full of grease sitting on the stove. The grease then spilled and caught the curtains on fire in the kitchen.

When crews arrived they say they were able to quickly contain the flames because of quick thinking by the teenager who lives there.

"The teenager left the residences without trying to extinguish the fire which was smart on his part went to a neighbors and called 911, and our crews arrived and we had very minimal fire condition, and the smoke conditions- the conditions were minimized and they are going to be able to return to their house today,"  said Mark Catanzarite, South Bend Fire Department Battalion Chief.