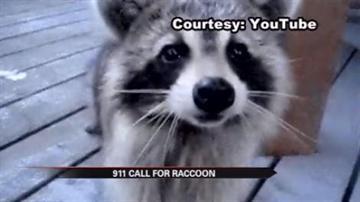 SOUTH BEND, Ind. -- This next story has three key things: A bag of chips, a wild raccoon and a frantic 911 call to St Joseph County dispatchers.

We have all done it, driven by an animal hit by car. Most of us keep on driving, but this time one South Bend woman decided to stop and it was not for a pet. She stopped to help an injured raccoon.

"It's very unique. Yea, it would be classified as crazy for me," said Kim Spaniolo.

But it is what she did next that was even more surprising. The woman used potato chips to lure the injured raccoon into her car. Once in the front seat, the raccoon fell fast asleep, but when it woke up and she had no more chips it turned on her.

With no where else to turn, the woman called 911.

So the St. Joseph County Humane Society was called in to get the raccoon out of the car.

However, the help did not come without a warning -- sometimes it is best to keep on driving.

"Don't pick up wild animals. I don't care how cute, little, whatever, they are dangerous. If they are carrying rabies in this county, that is a bad thing," said St. Joseph County Humane Society director Dr. Carol Ecker.

Ecker says if you ever think about trying to save an injured animal - don't. She says the only thing you should be grabbing is a phone, so you can call them.