Race for the White House: Obama and Romney focus on jobs 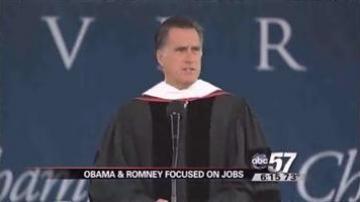 The gay marriage debate continues to dominate the political landscape, but President Obama and Mitt Romney are both eager to get the focus back on the economy.

"Bain capital walked away with a lot of money from this plant - we view Romney as a job destroyer," he said.

Team Romney said the new ad is just an attempt to distract voters from the president's weak record on job creation.

Meantime, women could be the key to victory.

A recent ABC News poll found that men prefer Romney by a modest margin, but among women, Obama crushed his Republican rival.