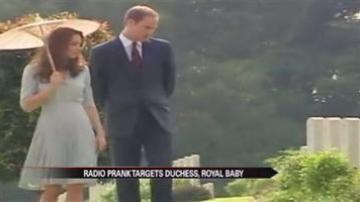 The royal baby is now at the center of a bizarre radio prank.

Two Australian radio DJs pretending to be the Queen and Prince Charles prank called the hospital where Catherine, the Duchess of Cambridge is staying.

They actually managed to talk to one of Kate's private nurses who told them about her condition.

The hospital says it "deeply regrets" violating her privacy.

''There's been an outpouring of support for the couple and excitement at their baby news, and so I think that must have given them encouragement and must have made them feel perhaps a little bit more positive about the whole thing," said Victoria Murphy, Royal Reporter.

Barely 12 weeks pregnant,  the royal couple were forced to break the news to the world after Kate was admitted to the hospital after suffering from severe morning sickness.