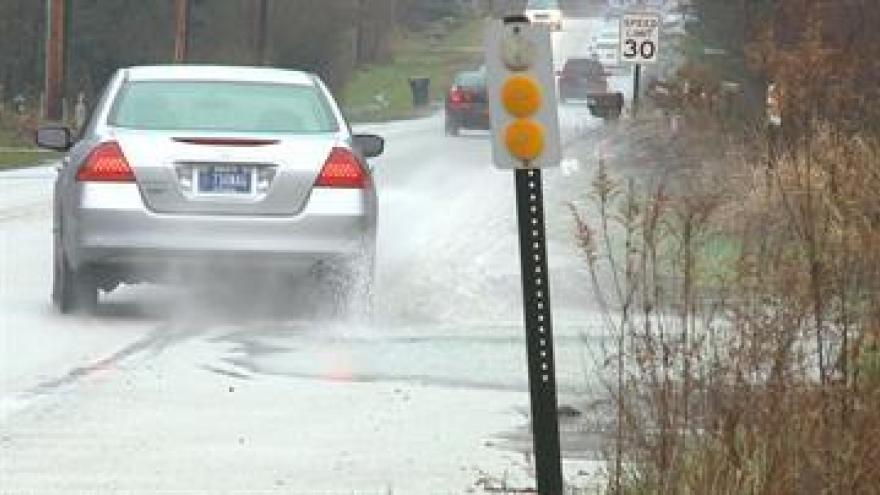 SOUTH BEND, Ind. – Rain followed by snow created a unique hazard as the year’s first big snow storm barreled towards South Bend.  Police and street departments are reminding drivers of the hazards of driving on ice.

“Every year we see traffic crashes dramatically increase when we see the first few snowfalls,” explained Captain Phil Trent of the South Bend Police Department.  “A sort of learning curve kicks-in and people learn how to deal with it.”

Tuesday’s storm presented a unique challenge for drivers not used to driving in the snow after months of summer weather.  For most of the morning rain fell and flooded streets, the water left on the roads could freeze, creating and icy problem across the city.

“It’s the combination of the rain and the potential for it to freeze and turn the roadways into skating rinks,” described Capt. Trent.  “We’ll be taking crash reports nonstop.”

The police and street departments are asking residents to be mindful of the hazards presented by flooding that could freeze over.  Experienced drivers, like 10-year South Bend resident Dave Stefansic, know the hazards and how people seem to forget how to drive in winter conditions.

“The black ice is always something that people have to learn again,” Stefansic explained.  “I don’t think anybody around here is ever ready for it, it just seems like it takes them about two or three snows before they get the hint that, ‘oh, I need to brake sooner,’”

South Bend police are urging drivers to take things a bit more carefully while they get their ‘snow legs’ back this year.

“Just slow down, remember all those things you’ve dealt with before,” Capt. Trent explained.  “If you know you’re on ice maintain a safe distance from other vehicles and slow down significantly.”

Residents are also urged to help clear out any flooded streets if possible to reduce the possibility of black ice on the road.