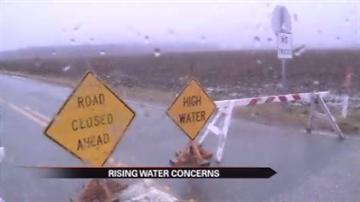 ST. JOSEPH COUNTY, Ind. -- Several St. Joseph County roads are closed to drivers because of flooding from the steady rain and warm temperatures. Now county crews are worried about the freezing conditions on the way.

Wednesday, several people living in the area of Layton Road in Saint Joseph County, Indiana woke up to find they had waterfront property.

While some residents found creeks or streams, John found a lake in his yard.

"It's never been this bad, the flooding. You can see the cars, it's almost up to the tires,” said John, who declined to give his last name.

The water is more than a foot deep and still rising.

Less than half a mile down the road, the water is already at a dangerous level.

"The county police called me this morning there was one car abandoned. Well sort of, the guy was actually sitting on top of it,” said Charles Feirrell, Supervisor Woodland District in St. Joseph County Highway Department.

Two more cars got stuck in the flood waters this morning and came close to floating in the ditch.

County officials say the ditches along elm road are 10 feet deep in places.

“If you go into the ditch quickly, you can drop quickly and overturn. The ditch, even though it's deep, it's narrow so if you can't get your doors open you're in a lot of trouble,” said Feirrell.

Locals say they're used to flood conditions like this.

"It depends on how much rain you get out here and the soil level as far as the saturation. Thank god we don't have frozen ground,” said John.

But with a cold front moving in, frozen ground is reason for concern.

County officials are urging drivers to pay attention to the high water signs and the barricades.

They say the roads will be closed until the water levels go down.