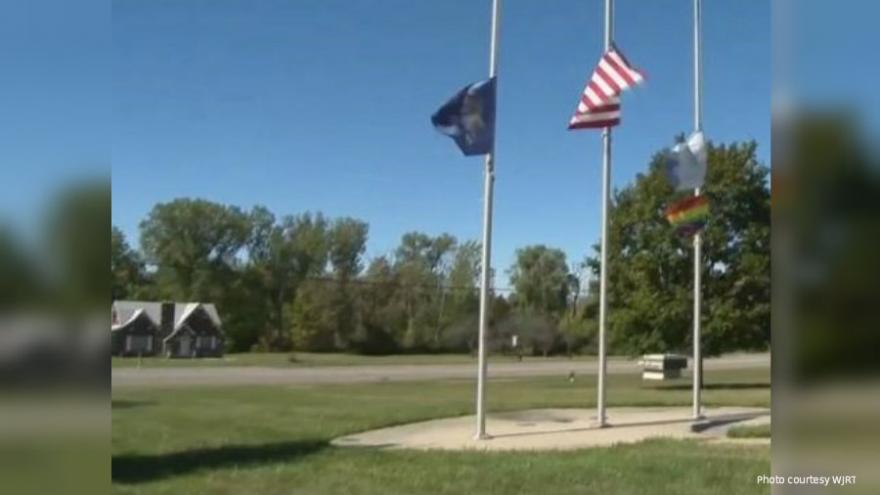 Burton, Michigan (WJRT) -- October is LGBTQ history month, and the Burton mayor is putting on a public display of support at city hall. The gesture isn't coming without opposition.

City council president Steve Heffner says it opens up a can of worms. Meanwhile, Mayor Paula Zelenko says there's no better time than now to take a stand against discrimination. WJRT listened to their conversation at Monday's city council meeting. Here's an excerpt:

(Zelenko) "I'm going to tell you, to stand here in a public meeting and take a stand on equality and then privately to say other things..."

(Heffner) "Oh, I'm not against equality."

(Heffner) "I'm not against equality. To each their own. Love your neighbor. I'm not judging."

Heffner says he believes the rainbow flag violates Burton city ordinance 157 under zoning - outdoor displays. The city attorney said during the same meeting that it didn't violate the ordinance, citing that it is not being used commercially or for advertisement.

Heffner believes it is an "advertising" flag and sets a precedent for other organizations. He says he has received three or four calls from others expressing their displeasure.

Mayor Zelenko made the sole decision to put the flag up after meeting with the Michigan Department of Civil Rights and the Justice Department on ways to be proactive in addressing discrimination against the LGBTQ community.

She also said that the flag's history goes back before its association with the LGBTQ community. She believes this has nothing to do with promoting a lifestyle. For her it is all about encouraging equality.

The flag will stay up through the month of October. Mayor Zelenko plans to fly it again in June.

Heffner, who says council wasn't consulted about the decision, isn't expecting to see this issue on the agenda any time in the near future.