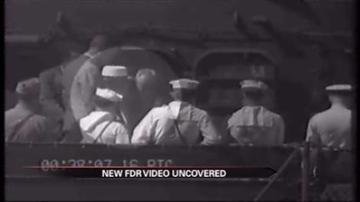 New rare video of our 32nd president is surfaced Wednesday has surfaced thanks to the discovery made by an Indiana college professor.

The rare film footage of was found by a Franklin College Professor in the national archives.

The video is from 1944 of President Franklin Delano Roosevelt in a wheelchair. It is a rarity for the man who kept his polio diagnosis from the public eye.

In the video you cannot see the chair but you can see him gliding as if he is riding.