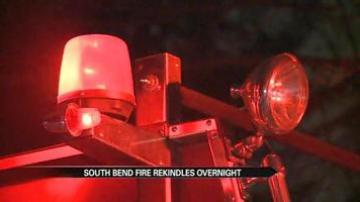 Crews responded to the home on the 2000 block of Huey Street around 10:15 p.m. Firefighters say that when they arrived on scene, flames were coming out of the windows.

The owner of the house says she was cooking when her fire alarm went off.

After searching the house, she saw flames coming from the space heater in her bathroom.

She believes that's where the fire began, but investigators are still working to determine the cause.

She and her dog were able to escape the house without injuries.

Later, while the family was boarding up the house, the fire re-kindled in the porch's roof.

Fire crews were called out for a second time around 2 a.m.

Crews say the house is a complete loss, and the family does not have fire insurance

The Red Cross is helping alleviate the hardship by providing a hotel and money for food and clothes.