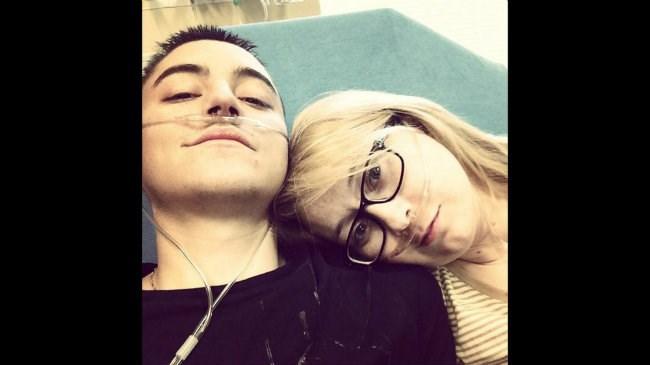 (CNN) -- Katie Prager, the wife in the real "Fault in Our Stars" couple, died Thursday after complications from cystic fibrosis and a lung transplant. She was 26 years old.

"Early this morning, she gained her wish of being at home, in her bed, surrounded by her mom, dad, brother and her dogs, dying peacefully, away from the hospital, tubes, IVs," her mother, Debra Donovan, posted on Facebook. "The days to follow will not be easy but I find comfort in knowing that my girl lived, she really lived."

Katie had been in hospice care in her Flemingsburg, Kentucky, home since September 7.

Her husband, Dalton Prager, died just days earlier, on Saturday, after suffering from the same disease. He was 25.

"Dalton fought a long hard battle with cystic fibrosis," Katie posted on Facebook at the time. "He was a courageous fighter and 'give up' wasn't in his vocabulary."

A love story stronger than fiction

The young couple garnered worldwide attention last year after CNN wrote about Katie's fight to get a lung transplant.

They were known as the real "Fault in Our Stars" couple, as their love story bore a resemblance to the 2012 book and 2014 movie "The Fault in Our Stars," in which teenage cancer patients fall in love.

Katie and Dalton met on Facebook in 2009, when they were both 18. Katie noticed that Dalton's mother had posted a photo of Dalton in the hospital.

"If you ever need a friend to talk to, you can reach out to me," she wrote.

"Sorry, but do I know you?" he responded.

No, you don't, Katie wrote back and told Dalton a bit about herself.

"My breathing is pretty crappy and I see you are in the hospital. I'm sorry. I know it sucks!...But you just gotta stay strong," she wrote to him.

Messages between the two flew back and forth. They realized they were falling in love, but Katie's doctor urged her not to meet with him in person, because Dalton had an infection called Burkholderia cepacia, which can be deadly for people with cystic fibrosis.

She defied her doctor, and on August 28, 2009, Dalton and his mother drove more than six hours from their home in St. Charles, Missouri, to Flemingsburg, where they'd arranged to meet at the Dairy Queen.

At 7:10 p.m. -- they remember the time precisely -- Katie got out of her car and saw Dalton leaning against a brick wall, looking cool and handsome in his sunglasses.

"My heart was racing, but I just went right up to him and hugged and kissed him on the mouth without even saying hello," she remembered. "I'm usually not that kind of girl, but it just felt so right."

For their first date, the couple rode the roller coasters at Kings Island amusement park a few hours away in Ohio. Dalton gave Katie a necklace for her 19th birthday, which was two days before.

The couple wed less than two years later, and despite their infections, they were relatively healthy for the next few years.

They bought a house in Flemingsburg and filled it with wedding photos and board games, hosting regular game nights and cooking and traveling.

Those years "were great," Katie told CNN days before she died. "We did stuff; we had fun. It was like something out of a fairy tale."

In 2014, the infection got the best of their lungs, and both Katie and Dalton entered the University of Pittsburgh Medical Center together to wait for new lungs. Dalton's came first, and on November 17, he had his transplant. In July 2015, after a long fight with Medicare, Medicaid and her hospital, Katie got her transplant, too.

But their medical struggles continued. Dalton seemed to do well at first after his transplant but then developed lymphoma. He overcame the cancer but was recently hospitalized in Missouri with pneumonia and a viral infection.

Katie's transplant never worked well. She was in and out of the hospital, and earlier this month, doctors told her there was nothing more they could do. She entered hospice care at her home in Kentucky.

The family had hoped to fly Dalton from Missouri to a hospital in Kentucky so they could could be together again. Ultimately, Dalton was never healthy enough to make the trip. He died in a St. Louis hospital, while Katie spoke to him through FaceTime.

The day before Dalton died, Katie told CNN she had no regrets about their decision to meet in person. For all the time spent sick or in the hospital, it's the time they spent together that stood out to her.

"It gave me some of the best years of my life," she said. "I'd rather have five years of being in love and just really completely happy than 20 years of not having anybody."

The last time they saw each other was July 16, their fifth wedding anniversary. Their love story was short, but she knew it brought joy and inspiration to others.

"I think that if we had gotten the chance to write a book that it would have been a bestseller," Katie said days before she died.

She even knew how their fairy tale would end.

"And they lived happily ever after," Katie said, "in each other's arms for eternity."