Recapping the IN Senate Debate 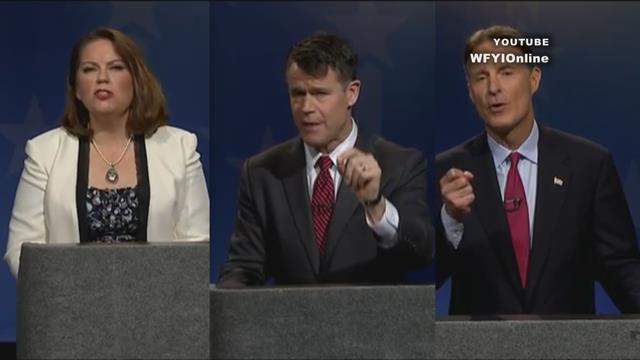 When Hoosiers head to the polls on November 8th, they will see three candidates from three parties. On the ballot will be Libertarian candidate Lucy Brenton, former Democratic Senator Evan Bayh, and Republican Representative Todd Young.
The hour long debate started with an opening statement from each candidate. Each one talked about why they are running and the issues they support.

After that candidate were asked questions, some of which came from the public who submitted them to the Indiana Debate Commission.

The first question centered on the failure of parties to work together. Each candidate had to describe an instance during their political career where they worked successfully with the other party to accomplish something meaningful.

Candidates debated a number of topics they are likely to encounter as a U.S Senator.

At close to 15 minutes into the debate candidates started disagreeing and the mud-slinging started. They debated about hours in work weeks, job, and insurance. Then they talked about Obamacare and why each candidate is for or against it.

In the weeks leading up to the debate, it has become heated partly because the race is key for the GOP to hang onto the its narrow Senate majority.

If you missed the debate and want to watch, click here.