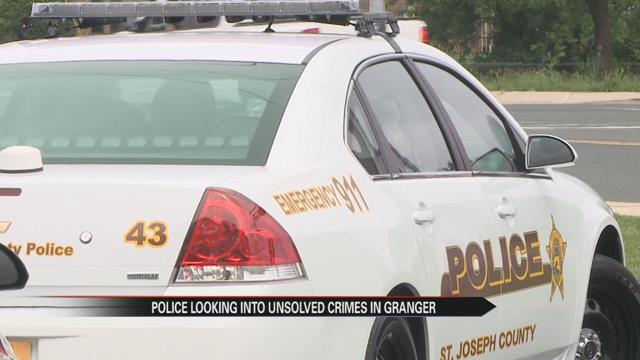 Police are looking into a number of burglaries, car break-ins, and vandalism reports in Granger.

Police said they are investigating incidents of theft and burglaries. But said crime overall in Granger has not increased.

“We’ve become very vigilant about it. The neighbors are watching each other’s homes a lot more,” resident Bob Sorenson added.

Sorensen is considering installing a security camera for the first time. He has lived in the Quail Ridge North neighborhood for 30 years.

“Break-ins that are unusual in this area, particularly around the state line and right around the golf course,” Sorensen explained.

Neighbors say they’ve seen and heard about more home and vehicle break-ins than usual throughout the spring and summer months.

Some even saying they fell victim to the so-called ‘Pillow Case Bandit’, who’s known for breaking into homes and using a pillow case to steal jewelry and cash, in several Michiana counties.

Now they are on high alert.

And following a Quail Ridge Homeowner’s Association meeting earlier this month, the board is creating new procedures to respond to crime.

“We’re trying to start a neighborhood watch. And we’ve started an email list. So whenever there is any issue we immediately send out a letter to blast to all the neighbors what’s going on,” said Kuzmic.

That’s in addition to hiring off duty police officers to patrol the neighborhood at any given time.

Neighbors believe thieves are targeting homes with packages left at the front door, and piled up mail in the mail box, signs no one is home.

One neighbor said his car was recently vandalized as well.