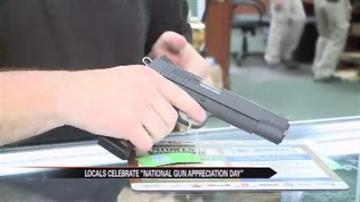 That gun appreciation is making gun sales in Michiana soar.

“Citizens across the United States are celebrating that today—their constitutional right to own firearms given to them by the second amendment,” Midwest Gun Exchange Manager Rocco Rigsby.

People across the country and right here in Michiana were lining up to purchase fire arms for what they are calling National Gun Appreciation Day.

“Anything above ten rounds would be considered ban-able [sic] so that is not only going to affect the A R style rifles, it is going to affect some of the pistols,” said Rigsby.

Rigsby says every time the Obama administration makes a statement about a possible gun ban, within hours they get a surge of sales.

“Taking the guns off the market, the guns are still going to be in people’s hands that should not have them,” said Rigsby.

“There is no reason that anyone needs an assault rifle or a mag that has one hundred rounds in it,” said Lawson.

Lawson says after the Sandy Hook tragedy, she thinks there should be restrictions on guns, but she says with all the recent break-ins in South Bend she felt she had no other choice to purchase a firearm to protect her and her three month old baby.

“It’s a shame that this is what it has to come to, but I have to make sure that she is safe,” said Lawson.