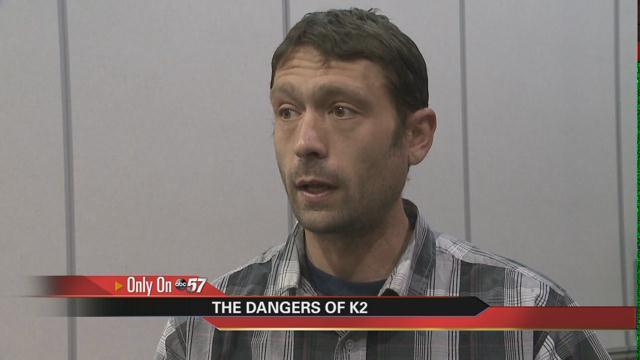 A recovering K2 addict is speaking out about the dangers of the drug.

Also known as synthetic marijuana, K2 is known to cause seizures, and has been spreading around Michiana in recent years.

Matt Laughlin, of Elkhart, first bought the drug at a gas station in 2005.

“It was in a little round container. It said ‘Mr. Smiley.' I didn't know what it was,” Laughlin said.

He immediately noticed that although it looked like marijuana, it was something else entirely.

“I thought the high was way more intense than marijuana,” Laughlin said.

These chemicals had Laughlin addicted after the first use.

“I would go three or four days without eating just because I wanted to get high,” Laughlin said.

He was broke and alone, living out of his car.

“It took away roughly five years of my life with my kids. I will never get that back,” Laughlin said.

His wake up call came in 2013, when he woke up hanging out of his car in an Elkhart parking lot covered in his own vomit.

He made his way across the street Faith Mission, where Michael Neff and others pointed him on the way to recovery.

Neff said he sees many people come into Faith Mission high off the drug.

Faith Mission has a zero tolerance policy for drugs.

“We've seen a lot of scary situations here with residents on it,” Neff said.

He's been sober for 18 months.

He has a car, apartment and great relationships with his family.

He said he hopes his story will serve as an example of what the drug can do.

“I want them to learn from my mistakes, rather than having to go down the same path I went through,” Laughlin said.
Share this article: