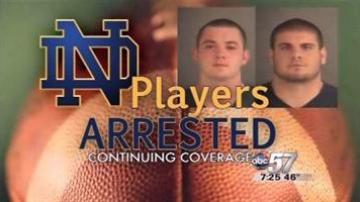 Rees,19, received a not guilty plea Thursday morning. He is being charged with resisting law enforcement, public intoxication, minor consumption and battery to law enforcement after police showed up to check on a noise complaint at the 700 block of North Notre Dame Avenue.

Officers claim Rees took off then was caught. His next court date is July 17.

On Wednesday formal charges were filed against linebacker Carlo Calabrese. He’s facing a count of intimidation after police say he interfered with Rees’ arrest repeating the phrase, “My people will get you.”

Calabrese,21, was also scheduled to be in court Thursday, however did not make an appearance. Instead his lawyer was present on his behalf. Calabrese's next court appearance is June 21 for a status hearing.

Stay with ABC57 for continuing updates.