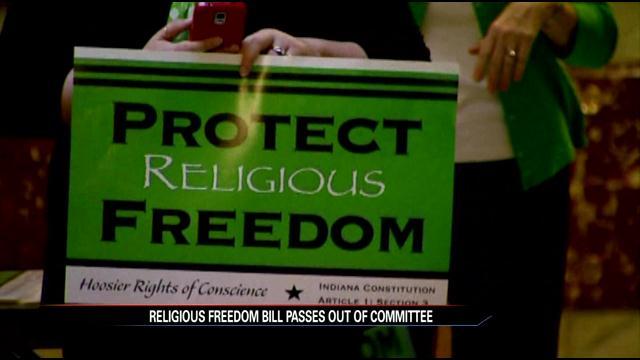 A controversial bill that has Hoosiers all over the state talking is one step closer to reality.

The Religious Freedom Restoration Act passed an Indiana House judiciary committee with a 9-to-4 vote on Monday.

It's a contentious issue. Backers of the bill say its about protecting the religious freedom of business owners.

But LGBT activists say it opens the door for businesses to discriminate against customers.

Both sides gathered Monday morning to voice their views for more than four hours.

Senate Bill 101 is a republican backed bill. One local representative, Timothy Wesco of Osceola, sponsors it.

If put into law, it would allow local business owners in Michiana to make decisions based on their religious preferences without the threat of government action.

A new addition to that is a provision that would prohibit an employee or applicant from filing a lawsuit against those companies.

Supporters say this bill is a must so that people aren't compelled to provide services against their religion.

But opponents say its making way for discrimination against religious and ethnic minorities, and the LGBT community.

The bill now moves to the full house for a vote.