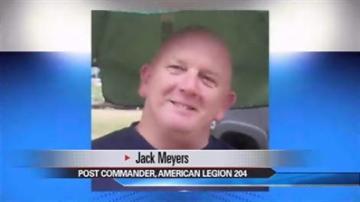 Brown was murdered on Saturday while visiting his estranged wife in El Salvador.

Brown was a Master Sergeant in the Special Forces and his friends at the American Legion plan on honoring him for his service.

The American flag at Post 204 is flying at half staff as members prepare to bury one of their own.

Fifty-three-year-old Michael J. Brown or Brownie as his friends at the Legion call him, was murdered in El Salvador Saturday night.

“It is devastating. Nobody ever thought something would happen like that, particularly to him with all of his training,” said Meyers.

Police say rebels are to blame for Brown’s death.

He was driving with his estranged wife, when he was ambushed and shot five times at close range. Brown died. His wife was uninjured.

Post Commander Jack Meyers said he, like everyone else in Three Oaks, has a lot of questions about Brown’s murder.

“That is a foreign country, so we are not going to know what they are going to do until they get it done,” said Meyers.

But one thing Meyers does know for sure, Brownie was a loved man and will be missed by folks in Three Oaks as well as the United States military.