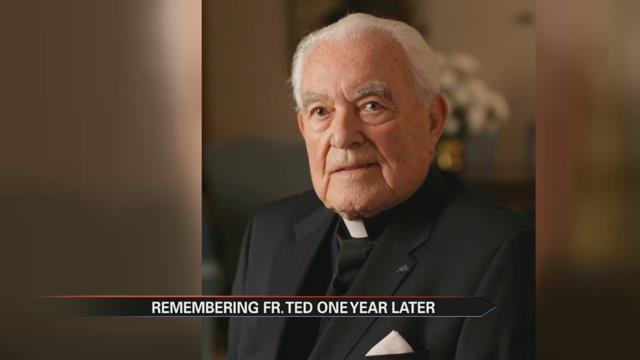 Last year during this time, perhaps the one place that best symbolized the magnitude of Father Hesburgh’s death was the grotto.

Those who were there said it was a surreal atmosphere, one where people could pay their respects to an extraordinary life.

In the days and weeks after his death, hundreds of students and former students shared their stories with ABC57 News about how Father Hesburgh shaped their lives.

Now, one year after his passing, those same stories will undoubtedly be shared again today.

Shortly after the passing of Father Hesburgh, President Barack Obama issued a statement, part of which read, “His deep and abiding faith in a loving god, and in the power of our shared humanity, led him to join the first-ever United states Civil Rights Commission, and join hands with Dr. King to sing “We Shall Overcome.

It was in those moments of civil rights leadership that shaped a life 97 years long.

A life that served popes, presidents, and an entire world.