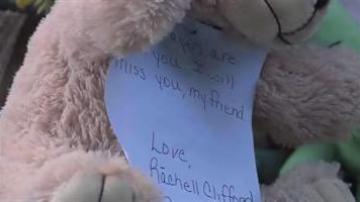 ELKHART, Ind. -- Sunday, an Elkhart family and neighborhood grieved the murder of a 7-year-old girl.

Kristyana Jackson was shot in the head during an apparent home invasion on Friday night. She was transported to Memorial Hospital where family friends and witnesses say she died this afternoon just before 3 p.m.

But, neighbors and friends chose not to reflect on the suspects but rather remember the little girl who lost her life.

On Sunday, family and friends gathered to remember 7-year-old Kristyana in front of her home on Kilbourn Street in Elkhart.

“They were just coming home from the Central-Memorial football game and some stuff happened,” explained Ballard of Friday night. “I don’t know exactly what happened or how the story went.”

But, neighbors remember the events of Friday night all too well.

According to neighbors, Kristyana was shot in the head when unknown suspects broke into her family’s home and opened fire. Neighbors say, her father, John Jackson was shot several times trying to protect his family.

“Her parents are really good parents,” sobbed Ballard. “She lives in a good neighborhood. She didn’t deserve what happened to her.”

John was treated and released from the Elkhart General Hospital on Saturday. But on Sunday, Kristyana died from her injuries.

“I just know that she’s going to be in a better place,” rationalized Ballard.

And while her friends and family struggle to cope, they’re trying to reflect on Kristyana’s infectious personality.

“We liked to go down the slides and the swings and the merry-go-round at school,” remembers Clifford.

“I remember how strong she is,” said Ballard. “She’s so beautiful. I love her.”

A vigil will be held for Kristyana and her family on Monday at 8 p.m. in front of her home in the 700 block of Kilbourn Street.