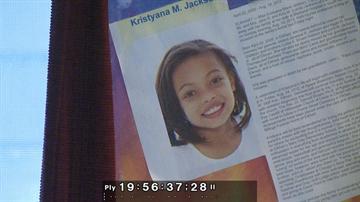 ELKHART, Ind. --  It has been 11 days since 7-year-old Kristyana Jackson was shot in the head in front of her home on Kilbourn Street in Elkhart.

Police are calling the attack a home invasion and they still have not made an arrest.

"She was beautiful inside and out," said Kristyana Jackson's mother Kimi Jackson.

John and Kimi Jackson said their 7-year-old daughter Kristyana loved to dance and make new friends, but what truly set her apart was her ability to make people feel loved.

"She always told me I looked pretty when I had on a new dress and she would say,’ Daddy you’re handsome,’" said the Jacksons.

They cannot believe she is gone, so they have not moved anything from her room.  It is just the way she left it the night she was shot in the head in front of their Kilbourn Street home.

"They just started shooting and they wouldn't stop shooting and he was trying to pull us in the house and then I had to see my baby right here on this floor dying," said Kimi Jackson.

Her mother wept as she relived that horrible Friday night.

"It was just awful. I have nightmares about it," said Kimi Jackson.

Police still have not caught the two men who murdered the second grader.

"They could have had whatever they wanted but they took our baby," said John Jackson.

The Jackson's have been dealing with the grief the best they can, with a lot of help from friends, family and people they do not even know.

"People just complete strangers helping us it just means so much to us," said Kimi Jackson.

Hundreds of cards, flowers, food, and donations have been pouring into the Jackson's home.

"She was only seven years old and she only met so many people but you would have thought she was around for 70 years considering the amount of support and the love and the way people talk about her," said John Jackson.

But now that beautiful, bright little 7-year-old is gone and her parents are asking for the community to help catch her killers.

"They did what they did to my baby and then they get to go home and spend time with their baby," said John Jackson.

All they can do now is pray for the murderers to be caught and hold on to memories of Kristyana, like the first time her dad dropped her off at daycare.

"The first couple of days she cried and then after that she was fine,” said John Jackson. “Me? I kept crying. Every time I dropped her off I cried.”